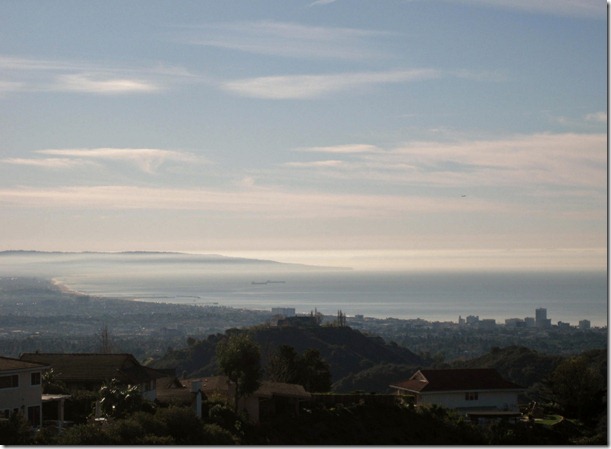 The day after Christmas seemed like a good day for a hike.  After enjoying the many fun holiday foods and beverages the idea of getting out for a hike to burn a few of those calories was appealing.  Our friends, Tim and Dinah, had recently done a hike in the Santa Monica mountains and invited us to join them for a return to that trail.  Their daughter, visiting from Ohio was able to join us as well.

The hike is the Westridge Trail to San Vicente Mountain.  In the 1950’s, San Vicente Mountain served as a mountain top military installation to defend Los Angeles against Soviet missile attack.  From the top of Westridge Road in the Brentwood neighborhood, this 7.4 mile round trip hike offers some stunning views of the Los Angeles basin, from the San Fernando Valley to downtown LA, West LA, Long Beach, Palos Verdes and the entire Santa Monica Bay.

The hike to the peak involves a modest elevation gain of 900 feet, although with occasional steep inclines you can certainly get your money’s worth by getting your respiration rate up.  You can use the many opportunities to take in the views as a good excuse to catch your breath.  If you need more challenge, there are some parallel paths that will take you up and over little peaks that run alongside the fire road.  At the end you can climb the lookout tower for the ultimate views where you can get the 360 degree panorama.

On the day we went, the views were good but less than spectacular due to a low lying haze.  Still the view is better than it appears in the photos.  The weather was good, even a bit warm given that we got started at about 9:00am.  We began to shed our outer layers fairly early in the hike.  The trail appears to be quite popular.  On our return trip we encountered quite a bit of other hiker traffic, including the actor, Ted Danson, which is not surprising given the proximity to the Brentwood neighborhood.

It was a good hike with good friends and good to get some exercise following the Christmas festivities.

2 thoughts on “Hiking in the Santa Monica Mountains”