From Bocas del Toro, we took a morning boat back to the mainland to the town of Almirante.  At the dock in Almirante, a young guy asked if we wanted the bus to David, we did.  I thought the bus station was a short distance from the boat dock.  I asked how much.  He said $1.  I thought he would take us to the bus.  Instead, he helped us carry our luggage out to the highway and flagged down a taxi.  The taxi ride would be another $2.  The first bus arrived and was pretty much full already.  There were enterprising entrepreneurs about that were trying to sell us on the idea of taking a taxi instead.  They ensured us that the next bus would also arrive full (how do they know these things).  We finally settled on sharing a taxi with a gentleman, originally from NYC currently residing in Bocas, for the ride to the town of David where we would transfer to a bus for Boquete. 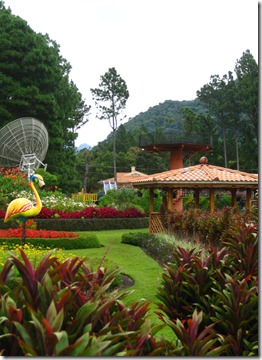 Boquete is a town of about 5,000 people in the highlands of the Chiriqui province of Panama.  It is a mountain town referred to as the Napa Valley of coffee and is known throughout Panama for its cool climate and pristine natural setting.  The mountains surrounding the town are very green and rich with blooming tropical plants.  Near Boquete is Panama’s only volcano, Volcan Baru, whose summit tops out at 3475 meters (11,500 feet) making it the highest point in the country.  Boquete is popular with retirees from the US and Canada.  Ten years ago, AARP’s “Modern Maturity” magazine named it as one of the four top places in the world to retire.  We observed several of them spending their Social Security money in the local bars. 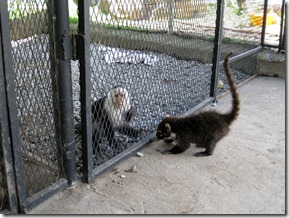 With all of the beautiful flowering plants, there are several beautiful gardens in and around Boquete.  We visited one such garden, Mi Jardin es Su Jardin.  The garden which surrounds a lovely home is open daily to the public free of charge.  You’re free to wander the grounds or linger with a picnic, just don’t disturb the owners.  We also visited “La Jungla de Panama”, a wildlife rescue operated by a US ex-pat.  It is small but they have a few nice monkeys, birds and reptiles that you can interact with.

Here’s some of our favorite pictures.  From here we’ll be heading across Panama to Panama City.