I know it probably sounds silly that we need to have some downtime during our travel.  But sometimes we just need a break from having to plan the next hotel stay, transportation and activities.  We chose San Jose as a break between visits to Tortuguero and Puerto Viejo.  It gave us a chance to regroup, resupply, catch up on organizing photos, updating the blog and to see a bit of the city. 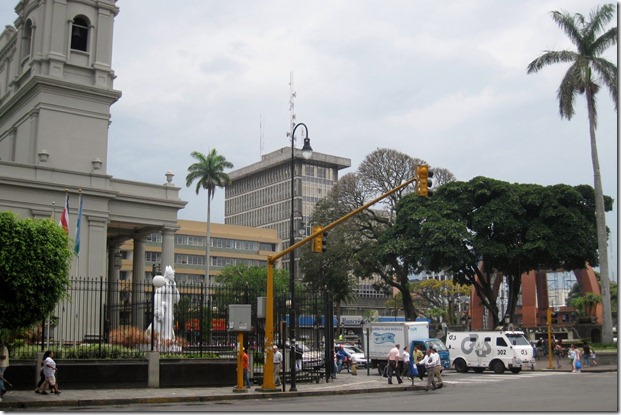 San Jose is in more or less the geographic center of Costa Rica in a sort of bowl of the Central Valley at 3,700 feet above sea level, so daytime temps in the upper 70’s.  This city itself has a population of 350,000 but when you count the many suburbs, the metropolitan area counts 1.5 million residents.  The central part of the city is laid out with numbered

Calle’s running north and south and Avenidas running east and west with a Calle Central and Avenida Central as the main arteries.  However, there are very few street signs and residents don’t generally use street names for identifying locations.  They tend to use landmarks instead, for example, go two blocks east of Teatro Nacional.  There are several streets in the central section that have been converted to pedestrian malls which are naturally the primary shopping zones.  In addition, there are several nice urban parks scattered throughout.  San Jose is a very modern city and at times you have to remind yourself that you’re not in a large North American city.  You see many of the same chain fast food outlets and retail brand stores.

We stayed in two different places while in San Jose, one largely unremarkable, the other, Hotel Casa del Parque is a 1930’s home just across the street from Parque Nacional.  It’s a very nice place, well maintained with a very classic look.  We had a very large room that must have been the “master suite” for the home.  The bathroom fixtures are a little dated (like 80 years) but otherwise it was very comfortable.

During our time there, it rained every day, usually it came in the afternoon and didn’t last more than an hour or so.  Often it came with thunder and lightning.  In fact, on two occasions, the thunder was some of the loudest, most violent I have witnessed in a very long time.  We were (fortunately) in our room at the time and both jumped at the sudden crashes of thunder.  It was quite exciting.

For a little day trip, we took a bus to visit Volcan Irazu.  This is the tallest of Costa Rica’s volcanoes and the highest point in the country at 3432 meters, around 11,300 feet.  It’s last major eruption was March 16, 1963.  The guidebooks say that it is possible to see both the Pacific and Caribbean Oceans “on a clear day”.  My guess is that this is very rare, however, on the day we went the sky was blue with puffy white clouds.  Very nice but no ocean views.  There is a bus that leaves from central San Jose to make the trip which takes about 2 hours.  We had a general idea of the location for the bus pickup.  We walked to that area giving ourselves plenty of time.  During the course of our search we asked 3 different people (all of whom seemed to have a role in directing bus traffic) for the location and were sent to 3 different spots many blocks apart.  Finally, we went back to where we thought it should be and found it about 200 feet from where we had started.  I related this story to our host at the hotel and she said that Costa Ricans are often so eager to help that they will provide directions even if they don’t really know the right place to send you. 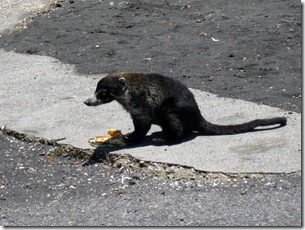 While at Irazu, we encountered a little creature that is apparently like a mascot there.  It comes around to see if the tourists have left any scraps of food around that need to be eaten.  We were told the name of the animal but I didn’t write it down and have forgotten it.  It is somewhat raccoon like with a long tail and small pointed snout.

All in all it was a good visit in the city (photos) that allowed us to recharge for the next phase.  Following San Jose, we’ll be visiting Puerto Viejo de Talamanca on the southern Caribbean coast before crossing over into Panama.

2 thoughts on “Downtime in San Jose”