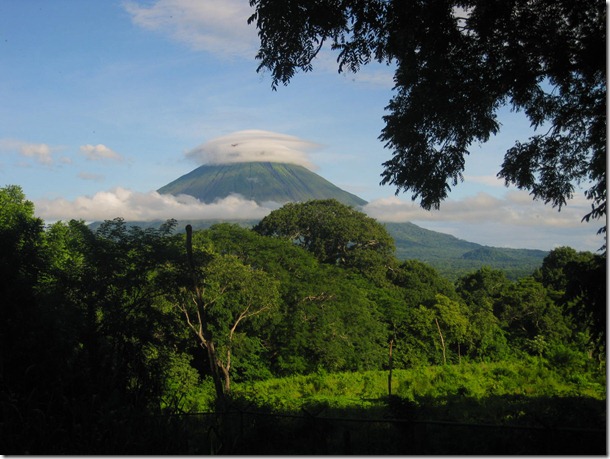 An island formed by twin volcanos, side by side, rises out of Lake Nicaragua.  The two volcanoes are Concepcion which rises 1610 meters above the lake in an almost perfect cone and Maderas at 1394 meters.  Lava flows created the isthmus which joins the two volcanoes to form the island.  Ometepe is a ecological jewel that is still very unspoiled, a rough and ready sort of place with shocking roads and lots of plant and animal diversity.

On the Maderas side of the island we stayed at Finca el Porvenir, a very charming place with 3 or 4 separate buildings set among a stunning garden with lush flowering plants, mango trees, shrubs and coconut palms.  Mixed in is a variety of wildlife including an abundance of butterflies, several types of birds, squirrels, pigs, lizards, dogs and plenty of insects.  Our room, which has a front porch with rocking chars and hammocks is small but nicely appointed with a sturdy wooden frame bed and a bathroom with walls covered in smooth river rocks.

Allow me to bore you with a small story about the logistics involved in our travel.  We knew we wanted to visit Ometepe after Granada.  So the first order of business was to decide when we would go and for how long.  Then we would need to select a place to stay and try to make reservations.  We’re not like the 20 year old backpackers who play it by ear and easily find a spare bed in a hostel dorm set up.  We selected 2 or 3 places from our guidebook that we thought we might like and made calls from an internet shop in Granada.  We were able to get a reservation for the timeframe we wanted.

Next we had to work out getting to the island.  From Granada, there is a boat that goes to Ometepe but only on Thursday and Monday at 2:00pm.  It is a 4 hour trip so we would be arriving on the island at around 6:00pm.  Based upon what we had read, this would be too late to get bus service out to the part of the island where we had booked a room.  We would be arriving into the town of Altragracia so we thought we might need to book a room for one night there and then get a bus the next day to the other place.

The alternative would be to get a boat from San Jorge, a town south of Granada along the western shore of Lake Nicaragua which is much closer to Ometepe.  The boat trip from there is only 1 hour and there are boats throughout the day.  This would allow us to get to the island much earlier in the day and therefore make the trip to Porvenir on the same day.  So, to do this we got up early, had our breakfast, finished packing up and got a taxi to take us to the bus departure area (can’t really call it a station, just a parking lot amid the Granada main market).  There we boarded a bus bound for Rivas, a town near to San Jorge.  We had to wait about an hour for the bus to depart and the trip to Rivas took about 1 and 1/2 hours.

Once we arrived at the Rivas market we were able to get a taxi that would take us to the boat dock in San Jorge, about 3 or 4 miles.  It would be more accurate to say that as we got off the bus we were surrounded by men asking us if we needed a taxi.  Somehow they were able to guess that we might be headed to Ometepe.  Go figure.

The next boat was scheduled to depart about an hour and 1/2 after we arrived so we took the time to have some lunch.  We then boarded the boat and made the 1 hour trip across to the town of Moyogalpa on Ometepe.  Once again, surrounded by men asking us if we needed a taxi.  There is a bus service that makes the trip to the part of island where we wanted to go but it’s infrequent and we were told by several people that it would take about 3 hours due to the route the bus takes and the condition of the roads for the last portion of the trip.  Our alternative was a private van for $25.  We thought this might be the best course. This took about an hour and, yes, the last portion of the road is really bad, dirt, huge holes, huge rocks.  Also, turns out, the bus would have dropped us at the entrance to Porvenir, which would have left us with a 300 or 400 meter, uphill walk with luggage in hand.

But, once we arrived we were very pleased with the beauty and tranquility of this place and are glad we made the effort to get here.  More about the island later.