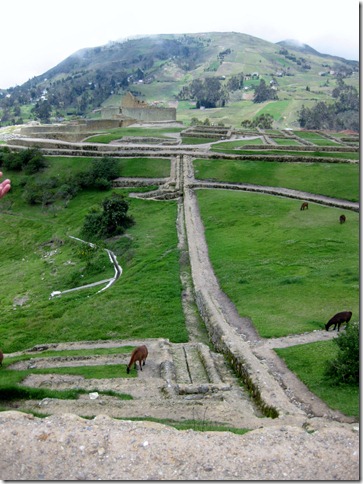 February 19, 2011.  Ecuador’s best preserved archeological site dates from the brief period when the Incas and the indigenous Canari co-existed here at Ingapirca for only about 30 years around 1500AD.  They battled for several years before agreeing to share the site but their peaceful reign was ended by the arrival of the Spanish who ultimately mostly dismantled the structures and used the stone to build nearby cities.

Signs point to pits called colcas that were used to store food and to acllahuasi, which is where the ceremonial and ultimately sacrificial virgins lived.  The trapezoidal niches are identical to those found in other ruins, such as Machu Picchu in Peru.

The most impressive part of the site is the Temple of the Sun, a large structure that was probably used for ceremonies and solar observation.  The Inca fitted the stones together so perfectly that no mortar is needed to hold them in place.  How the Inca accomplished this feat of transporting and carving the heavy rock still puzzles archaeologists.

We’re told that from above, Ingapirca mimics the outline of a Puma which was a sacred animal to the Inca.  The Inca were considered to be the more intelligent and occupied the portion of Ingapirca that is the head of the Puma.  The Canari were considered to be the stronger and occupied the portion that is the rear legs of the Puma.  The part in between, the stomach was were the food was grown, stored and meals were prepared.  The tail is

the beginning of the Inca trail that leads south to Pumapungo in Cuenca.

We also went to see the Inca Face which is a rock formation near Ingapirca.  To get to the ruins, we took a bus from Cuenca.  It’s about a 2 hour trip and even though this bus goes to Ingapirca and then waits there for 2 hours before making the return trip, as usual, they picked up and let off passengers all along the way.