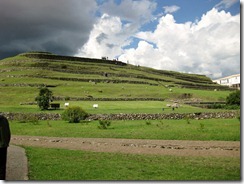 February 16, 2011.  Getting caught up on our time in Cuenca, considered to be the most important museum in Cuenca, the Banco Central Museum houses an extensive collection of artifacts from the ancient Inca residents of the valley where Cuenca now sits as well as dioramas depicting the typical life of the early inhabitants of the various regions of Ecuador.  We were not allowed to take photos inside the museum, however, no such restriction for the ruins.

The museum itself covers several floors in a modern building next to the Central Bank building.  Exhibits range from rooms filled with colonial and religious artwork, to walk-through re-creations of typical dwellings from the various regions of Ecuador, to an entire numismatic section that chronicles the country’s currency from spondylus shells through the now-defunct sucre.  The Tomebamba Hall is a highlight.  The museum was constructed over the ruins of an Inca palace — Pumapungo — and in this room, you will learn the history of the Incas in Cuenca, as well as see archaeological artifacts found in the 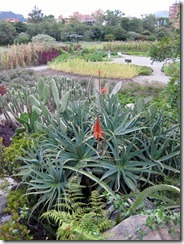 area.  Afterwards, you can exit and walk behind the museum to see the actual archaeological site, which has a few llamas wandering around it.  The complex is set on a high hillside, from which the views are wonderful.  In addition to the Inca archaeological excavations, the Museo del Banco Central has added some beautiful botanical gardens and a small aviary.

Pumapungo sits in the middle of Ingapirca to the north of Cuenca and Machu Pichu in Peru which together are the most important Inca communities of the Andes.  The Inca trail connects them.

It was very pleasant to wander the grounds.  The botanical gardens are very beautiful and have a very diverse collections of plants.  The aviary has a selection of beautiful birds native to the Ecuador jungle.  Well worth the visit.