Friday, February 25, 2011.  Today we were in the middle of a snow shower.  That’s right, I said snow.  We were at an elevation of 5,000 meters above sea level.  That’s right around 16,400 feet.  The air is very thin and even modest exertion causes you to feel winded.  We hiked to the second of two refuges on the south face of this huge volcano.  These refuges are waypoints for climbers who are on their way further up.  We had no intent to go higher.  Once we had our hot beverage we began our descent back down to the lower refuge which is at only 4,800 meters.  That’s when the snowfall began to pick up.  By the time we got down to the lower refuge it was snowing pretty good.

This is Vulcan Chimborazo.  It’s peak is at just over 6,300 meters above sea level (20,700 feet).  It’s the highest point in Ecuador and in South America.  Due to the bulge of the earth at the equator, the peak of Chimborazo is further from the center of the earth than any other point.  This is a monster mountain.

One of the activities offered by local tour groups is a mountain bike trip down the south face of Chimborazo.  We arranged to take this trip along with some other people that are staying at the same hotel as us in Riobamba: a couple from Holland and a young man from South Africa (he is traveling with his girlfriend but she didn’t want to go.)  Naturally, they provide the mountain bike and all of the equipment: helmet, gloves, elbow and knee pads. 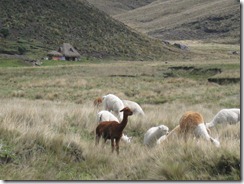 They picked us up at the hotel at 8:00am and drove us to the mountain with a few stops along the way to point out places and things of interest, including some of the fighting bulls that will be featured one day in the Plaza del Toro (bullring) in Riobamba.  We also saw some grazing Vicunas, Alpacas and Llamas.  The Vicunas roam on protected lands.  Along the way we were also getting a pretty good view of the mountain.  Since you can never tell what the weather will have in store, we were hopeful that we would be able to get some good photos of Chimborazo.  There was some cloud cover but parts of it were visible.

We arrived at the park entrance, paid a fee of $2.00 per person and then drove to the lower refuge.  After getting some instruction from the guide on the best way to make the hike up to the upper refuge we set out.  We walked very slowly and took frequent rest breaks.  Also, as suggested we drank lots of water and frequently ate some raw sugar.  It took about 45 minutes to ascend to the second refuge, 650 feet higher in elevation.  There was a young park employee there to assist hikers and climbers.  He said that he had been there for 8 days.  I’m not sure how long he stays before he gets a break but it’s a solitary job.  We had some hot tea a little rest before heading back down.

Once back to the lower refuge, it was time to gear up and start our ride.  The first part of the ride is the dirt road back down the park entrance, about a 20 minute ride.  On the way down we were able to get some fabulous photos of  Chimborazo.  From that point we had the option of riding on the paved highway or going “off road”.  We chose off road.  It is a series of trails that more or less parallel the highway and in fact join the highway for brief stretches.  There were some areas more difficult than others with a few gullies that required us to dismount and carry the bikes, given that we’re not experienced mountain bikers.

About halfway through, it started to rain pretty hard.  We were getting soaked and the guide took us to a shelter to wait for the rain to stop.  After about 30 minutes of waiting, the rain had eased but not stopped.  By this time, it was around 3:30, we were wet and cold and our resolve was beginning to wane.  Before long we decided to forgo the remaining ride.  The guides loaded up the bikes and we left to return to Riobamba.  The rain continued for quite some time after we were back in our hotel.

Even with the unfortunate turn in the weather, this was an awesome experience and we got some great photos.  This is an important mountain for Ecuador and dominates the view for miles around in this portion of the country.  We were fortunate enough to be able to experience it with relatively good weather conditions when we were up at our highest point.

One thought on “Vulcan Chimborazo”